The new A. Alfred Taubman Wing of University of Michigan Taubman College of Architecture and Urban Planning will open Friday, Sept. 8, 2017, after breaking ground in 2015. 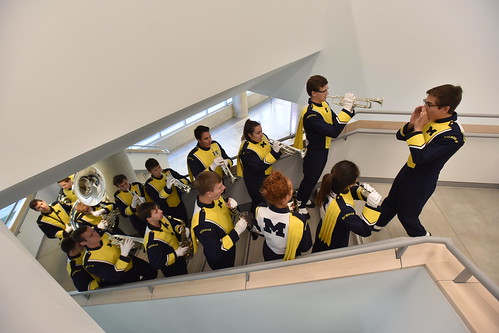 The $28.5 million addition and renovation project was initiated by a major gift from the college's namesake, the late A. Alfred Taubman (1924-2015). The project was supported by a gift from the late King Stutzman (A.B. '37); funds from the U-M offices of the President, Provost and Chief Financial Officer; and the support of alumni and friends.

Originally proposed in 2009, the renovation is the first modification to the Art and Architecture Building since its completion in 1974. The original building was designed by Robert Swanson of Swanson Associates, Bloomfield Hills, Mich. The design architect of the addition is Preston Scott Cohen Inc., Cambridge, Mass. The architect of record, Integrated Design Solutions, is an architectural firm based in Troy, Mich., led by President Paul Stachowiak (B.S. '76, M Arch. '77). Construction was done by Christman, Livonia, Mich.

"Taubman College is famous for our robot-filled fabrication labs and our wide-open studio floor,” said Dean Jonathan Massey. "The A. Alfred Taubman Wing and renovation augments these assets with a faculty research hub and a glorious two-story commons that allows the entire college to gather for lectures, studio reviews, and social events. We are excited to form new living and learning relationships within its complex, carefully considered and sumptuously daylit spaces."

The building will be commemorated Sept. 8 at an 11 a.m. ceremony in the A. Alfred Taubman WIng Commons, hosted by Massey. U-M President Mark Schlissel and the family of the late Alfred Taubman, including sons Robert Taubman and William Taubman and daughter Gayle Taubman Kalisman, will be in attendance. That evening at 6 p.m., Massey will kick off the college lecture series with his talk, "Building Tomorrow," followed by a college-wide celebration. All events are free and open to the public.

"I am honored to be able to preside over the college at this moment in its history," Massey said. "I am thankful for the leadership of former college deans Monica Ponce de Leon, Douglas Kelbaugh, and the late Robert Beckley, for putting in more than two decades of work that led to this moment. Without the generosity of Alfred Taubman and his commitment to the built environment and U-M, we would not be here. I am thankful to Alfred’s children for their continued support of the college."

The interior space of the addition is organized by a series of spiral-like stairs and ramps that create perambulatory sequences designed to create encounters between faculty and students. Externally, a saw-tooth roof reflects warm light, unifying the orthogonal geometry of the studio with the hexagonal, ramped commons. An exterior plaza links the new building with the existing one, providing an outside gathering space to foster community. Structural improvements, including an updated HVAC system and a new roof, upgrade the existing building.

The new A. Alfred Taubman Wing of Taubman College will provide:

The building receive LEED Gold certification. U-M adopted a LEED Silver design certification standard for major new construction projects. In addition, the university requires new construction to exceed by 30 percent a widely recognized energy efficiency standard, giving it one of the most rigorous construction standards among higher education institutions in the nation. For more on this effort: sustainability.umich.edu/campus/sustainable-design